Here’s two wonderful examples of apparently random lists - the first is from ‘The Aleph’ by Jorge Luis Borges:

On the back part of the step, toward the right, I saw a small iridescent sphere of almost unbearable brilliance. At first I thought it was revolving; then I realised that this movement was an illusion created by the dizzying world it bounded. The Aleph's diameter was probably little more than an inch, but all space was there, actual and undiminished. Each thing (a mirror's face, let us say) was infinite things, since I distinctly saw it from every angle of the universe. I saw the teeming sea; I saw daybreak and nightfall; I saw the multitudes of America; I saw a silvery cobweb in the center of a black pyramid; I saw a splintered labyrinth (it was London); I saw, close up, unending eyes watching themselves in me as in a mirror; I saw all the mirrors on earth and none of them reflected me; I saw in a backyard of Soler Street the same tiles that thirty years before I'd seen in the entrance of a house in Fray Bentos; I saw bunches of grapes, snow, tobacco, lodes of metal, steam; I saw convex equatorial deserts and each one of their grains of sand; I saw a woman in Inverness whom I shall never forget; I saw her tangled hair, her tall figure, I saw the cancer in her breast; I saw a ring of baked mud in a sidewalk, where before there had been a tree; I saw a summer house in Adrogué and a copy of the first English translation of Pliny -- Philemon Holland's -- and all at the same time saw each letter on each page (as a boy, I used to marvel that the letters in a closed book did not get scrambled and lost overnight); I saw a sunset in Querétaro that seemed to reflect the colour of a rose in Bengal; I saw my empty bedroom; I saw in a closet in Alkmaar a terrestrial globe between two mirrors that multiplied it endlessly; I saw horses with flowing manes on a shore of the Caspian Sea at dawn; I saw the delicate bone structure of a hand; I saw the survivors of a battle sending out picture postcards; I saw in a showcase in Mirzapur a pack of Spanish playing cards; I saw the slanting shadows of ferns on a greenhouse floor; I saw tigers, pistons, bison, tides, and armies; I saw all the ants on the planet; I saw a Persian astrolabe; I saw in the drawer of a writing table (and the handwriting made me tremble) unbelievable, obscene, detailed letters, which Beatriz had written to Carlos Argentino; I saw a monument I worshipped in the Chacarita cemetery; I saw the rotted dust and bones that had once deliciously been Beatriz Viterbo; I saw the circulation of my own dark blood; I saw the coupling of love and the modification of death; I saw the Aleph from every point and angle, and in the Aleph I saw the earth and in the earth the Aleph and in the Aleph the earth; I saw my own face and my own bowels; I saw your face; and I felt dizzy and wept, for my eyes had seen that secret and conjectured object whose name is common to all men but which no man has looked upon -- the unimaginable universe.

And the second is from Bob Dylan’s ‘A hard rain’s gonna fall’:

Oh, what did you see, my blue-eyed son?

Oh, what did you see, my darling young one?

I saw a newborn baby with wild wolves all around it

I saw a highway of diamonds with nobody on it

I saw a black branch with blood that kept drippin’

I saw a white ladder all covered with water

I saw ten thousand talkers whose tongues were all biroken

I saw guns and sharp swords in the hands of young children.

Posted by Mike Barrett at 14:05 No comments:

When I was in hospital recently I spent a few days lying on my side. When I finally opened my eyes everything had rotated though 90 degrees. People were walking on the wall. Panicking, I moved my head to an upright position and the scene slid through 90 degrees back to ‘normal’.  This happened more than once.

It reminded me of a psychology experiment I saw on TV. The experimentee was fitted with some glasses which inverted everything in his field of vision. He found movement very difficult for a few days but then he adjusted to the device and was able to go about the world as normal. His vision did not seem to him to be upside down.  Of coarse the image on our retina is inverted anyway so we all compensate for this all the time.

When the glasses were removed, he saw the world upside down once more, until his brain made the adjustment and his vision returned to ‘normal’. 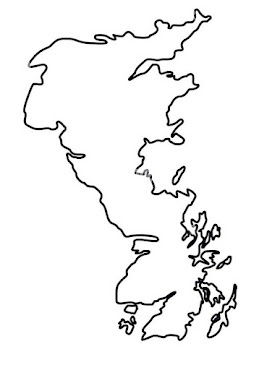 It is disturbing to see a map like this even though we know it is an arbitrary convention which puts North at the top.

Now here’s a question:  a mirror inverts things laterally (from left to right). Why doesn’t it do the same vertically (from top to bottom)?

Posted by Mike Barrett at 14:01 No comments:

Zeno’s paradox is based on the idea that time and space are divisible. Here is the paradox in its simplest form:

A moving thing to get from A to B must first traverse half the distance. And to get halfway it must traverse a quarter of the distance - and so on. Since the thing has to traverse an infinite number of (progressively smaller) distances this would take an infinite amount of time. Therefore it cannot move at all - so motion is impossible. Mathematically the resolution of this paradox depends on the fact that when you add the series 1/2+1/4+1/16 …. and so on, you don’t get infinity - you get one. But the paradox reveals a deeper problem about the nature of time and space.

in other words are there are tiny compartments or ‘quanta’ of space?
If it is then there would be a finite number of compartments between A and B so the paradox is resolved. But how does a thing move from one compartment to the next?

Think of the analogy of a film or video - each frame of which is a still image which if projected quickly enough gives the illusion of smooth motion. But is this ‘smooth motion’ really what is happening?
If time is made of a succession of instants or ’nows’ then either each ’now’ has no duration and time is smooth or each now has a finite duration and it is lumpy. If time is lumpy then how does it get from one lump to the next?


Perhaps we should remember that time and space are simply human concepts with which we try to explain the World. The World just IS.
Posted by Mike Barrett at 21:21 No comments:

How is anything new ever made?

Perhaps this question can be boiled down to a simpler one: How do we make a choice when there are few constraints? or How do we choose between alternatives? or even How do we make random choices?

Ask a computer to choose a random digit and it may be programed to generate an apparently random number by using complex algorithms involving huge prime numbers.

We imagine we can choose between 2 alternatives easily. Apolonius’s ass is said to  have starved to death because it could not decide between 2 equally attractive piles of hay. How do we decide? ‘We just pick one’ you say but what does this process of just piking involve?

Evolution is meant to proceed by  selecting the most well-adapted random mutation. But what does the process of randomness actually entail?


The second law of thermodynamics depends on random interactions more likely to produce chaotic than ordered structures. But what governs these random interactions? How do they take place?
Posted by Mike Barrett at 16:13 No comments:

Tumbleweed
Once they have enjoyed the splendour and energy of City Park and admired the ornate elegance of City hall, a visitor wandering though the City’s streets will be met with one clear impression: urban decay. Beautiful facades with ornate embellishments are now derelict or disfigured by a series of cheap additions which tell a tale of failed enterprises. Empty and neglected buildings reinforce the story that we are heading on a downward slope to disaster. Buildings constructed since the 1960s are amongst the most depressing examples of brutalism to be seen anywhere in Britain.  Parts of our City are deserted at times when other towns are bustling with activity.  The visitor retires to a more pleasant environment with all their prejudices confirmed.

But what of the good people of Bradford?
The symptoms of depression include:
Planning
The City’s many planning mistakes have been based on two fundamental myths:
Lack of vision, creativity and confidence have plagued some disastrous, and sometimes even corrupt, decision-making in the past. For too long we have laboured under the heavy grey cloud of low expectation:
“Well, it’s Bradford isn’t it?” (shrug).

Wake up Bradford!
The citizens of Bradford deserve much better than this. We need to rediscover pride in our City and ourselves. The City centre should be at the very heart of our inspiration and hope.

Let’s paint Highpoint pink!
Highpoint is the derelict, ex-YBS, bunker-like building at the foot of Westgate. Painting it bright pink could be the very beginning of a new urban aesthetic. And why stop there?  Over time, Bradford could become a colourful city of wonder and excitement, lifting the spirits of its citizens and its visitors. 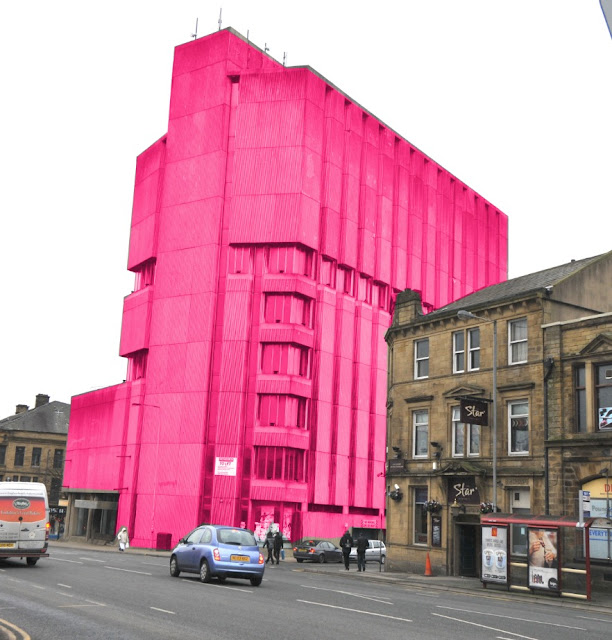 Let's hear it for the dead

The meanderings of a befuddled mind.

"When we try to pick out anything by itself we find that it is bound fast by a thousand invisible cords that cannot be broken, to everything in the universe." - John Muir, C19 Scottish/American naturalist